On October 21 and 22, 2017, TexLUG-Houston joined host Texas Brick Railroad to provide displays at Houston Maker Faire.  Centered in the space was a large train and town layout with 5(!) tracks crossing bridges.  An assortment of trains ran throughout the show, including a Princess Train and a Galveston Island Trolley.

One TexLUG-Houston member set up a large classic space display with three monorail loops, custom space ships, aliens, and more.  In addition, there were Star Wars models, a pirate/medieval collaboration, and a highly detailed scene with an Asian temple, jungle, and waterfall.  Four tables of play brick allowed kids and adults to use their own creativity.

Participation included 16 AFOLs and 3 TFOLs (combined totals for both LUGs).  Public attendance was approximately 7,000 total for two days.  TexLUG-Houston would like to thank Innovation Spark for once again inviting us to be a part of Maker Faire.

Visit our Events page for more information about past and upcoming events. 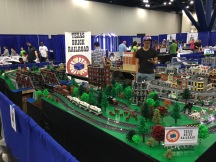 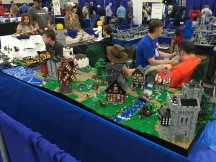 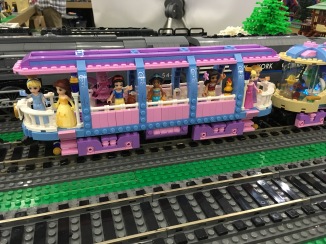 Photos by members of TexLUG-Houston.