December 12 Meeting and Holiday Party: Typically in December Houston Brick Club has a holiday party at a member’s house.  This year we adjusted and held the party online, and 21 members attended. Secret Santa gifts were opened, to much excitement. There was the usual discussion about possible upcoming events and Brick Rodeo; plus conversation about many other things. The highlight of the evening was a live piano performance by a Club member.

November 14 Meeting: This online meeting was attended by 16 members of Houston Brick Club. Brick Rodeo was discussed. A few Thanksgiving MOCs were shown.  There was conversation about organizing photos of Club activities.  Holiday Party was scheduled for Dec. 12.  As always, much general conversation, both LEGO®-related and not.

October 17 Meeting:  Ten members of Houston Brick Club participated in an online meeting.  Various MOCs were shown, including Halloween builds, skyscrapers, and a space habitat.  There was discussion of possible in-person events at the end of this year or early next year, and ways to promote Brick Fiesta (July 2021).  As usual, plenty of other LEGO®-related talk.  Next meeting will be in November.

September 19 Meeting:  Sixteen member of Houston Brick Club participated in an online meeting.  Various builds were shown, including:  a complex virus, a work-in-progress train turntable, several classic space vehicles, and a couple large mosaics.  There was discussion about possible online and in-person activities for the rest of the year.  Next meeting will be in October;  members will be building Halloween-theme MOCs to show each other.

June 20 Meeting:  Fourteen members of Houston Brick Club joined an online meeting for two hours.  Several members showed completed or in-progress MOCs.  There was a lot of discussion about rare parts, cleaning and polishing LEGO® bricks, and much more.  We had so much fun chatting that no one took any screenshots!

May 2 Meeting:  Houston Brick Club held its third online meeting, and 20 members participated.  The build challenge was to create a flower or tree – several members showed what they had made.  One clever MOC used barrel pieces for the trunk of a tree.

One member showed a couple in-progress images of his San Jacinto Monument project.  Another showed computer renderings of a landscape he is designing.

Members also enjoyed some general conversation and a chance to catch up with each other.  We are hoping that maybe by June we can return to meeting in person again.

Included below are a few screenshots from the meeting.  Photos and models are by members of Houston Brick Club. 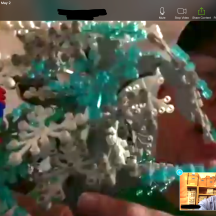 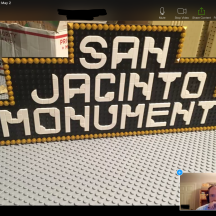 April 11 Meeting:  This was the second online meeting for Houston Brick Club, and this time 21 members joined in.  We played a round of LEGO® Jeopardy that had been created by a Club members for the 2016 Brick Fiesta .. hopefully we will have another version for Brick Fiesta 2020!

We also talked about the micro Houston project, along with discussing some MOCs and building techniques.  One member showed his city layout with monorail.

A few screenshots of the meeting are below.  Photos and models are by members of Houston Brick Club.

March Meeting:  The original meeting was cancelled due to COVID-19 concerns.  We expected about 20 Club members to attend.

Instead, on March 28 we held our first-ever online Club meeting.  Eleven members joined in a conference call to talk about things we’re building or other projects we’re working on.  In-progress MOCs included a spaceship, a train, a roller coaster, a space rover, and a brick-built monorail.  Other discussion items included sorting, storage and organization, and cleaning of LEGO® bricks.  This went very well for a first time, and we intend to have another online meeting in two weeks.

A few screenshots of the meeting are below.  Photos and models are by members of Houston Brick Club. 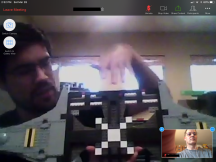 February:  No meeting held due to the multiple display events we participated in this month.

On January 18, 2020, about 20 members of Houston Brick Club met at a local store.  The main purpose of the meeting was to continue to working on our model of downtown Houston.  There was also discussion of upcoming events and other LEGO-related conversation.  Several members carefully searched the store’s supplies for the perfect parts for their own creations.

The model of downtown Houston can be seen in the photos below.  We are planning to have this completed for our Brick Fiesta exhibition in July.  We have made good progress but still have a ways to go.  Sponsorships are available – depending on the level of contribution, your name or business could be on the model .. or even have your building constructed in LEGO®!  Please Contact Us for more information.

Houston Brick Club wants to thank the owners of Bricks & Toys Destination for their fantastic hospitality!  The store sells new and used LEGO® sets, loose parts, and mini figures, plus it has areas to play and build.  It is located in Katy, just west of Houston.  Stop in and check out the selection!

Photos and models below are by members of Houston Brick Club. 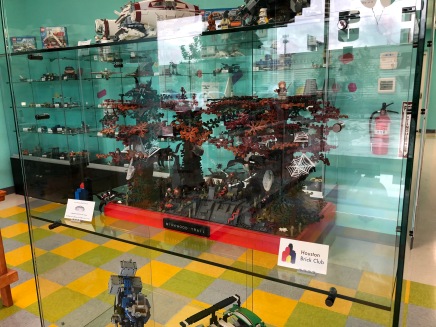 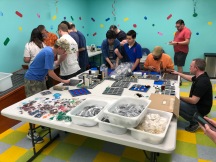 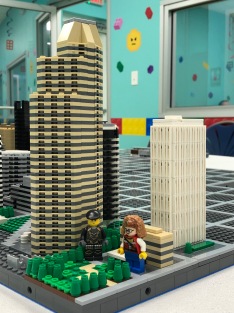